A Roman Temple to a Persian God

Between Southwark and London Bridges, on the City side,and slightly away from the river, lies London’s famous Temple of Mithras which was revealed only after a Luftwaffe air raid during the Second World War. At that time a plan was devised to better understand the development of ancient Londinium and its medieval sites and a series of trenches were cut across the bomb-sites that were scattered around the City. Up to a third of the area within the old city had been devastated by enemy bombs presenting an opportunity for archaeologists to get amongst the rubble and investigate. Due to post-war austerity, there was a limit to how much digging could be undertaken but at the same time, the newly formed Roman and Medieval Excavation Council recognised that a significant proportion of the historical City was laid bare for the first time in centuries.

In all, some fifty-three sites of interest were excavated between1947 -1962 and many discoveries were made including an unknown fort in Cripplegate, an ancient quay at Pudding Lane and remains of the first wooden bridge to span the Thames. One of the best known of these discoveries - the Mithraeum - was excavated in 1954 while 30,000 Londoners looked on.

The temple, dedicated to the Persian God Mithras, dates back to around 240 AD. The worship of this ‘god of the Unconquered Sun’ developed into an all-male cult that was particularly popular among soldiers and successful merchants. When it was revealed, it was found to be bigger than anything previously found in London. It was said that the plans were not unlike a Christian church with an apse to house the altar at its western end and two pillars holding up the roof. It would have been completely dark 'back-in-the-day' to remind initiates that it was in a cave where Mithras slew the sacred bull from whose blood all life flowed.

Membership of the ancient society was secretive and extremely exclusive and required applicants to pass through a series of harsh physical and mental ordeals. Only a life of abstinence, obedience and courage would enable members to rise through the seven ranks of initiation. 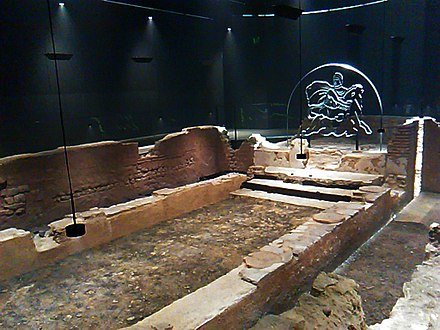 The Six Bridges Walk: A Tour With A Difference
London Bridge
Southwark Bridge